"I Escaped War-Torn Syria": The Story of a Johnson & Johnson Refugee Scientist

Share
With his hometown of Deir Ezzor plagued by constant fighting, Abdullah Al Hommada had no choice but to flee his country for a chance at a better future outside of Syria. Today, he's rebuilding his life in Leiden as a Janssen scientist.
By Nada RaadJanuary 22, 2017
Today's Top Reads Close

When Abdullah Al Hommada speaks, you can’t help but smile when you hear his joyful voice, filled with hope and ambition. It’s hard to believe that it's the same person who made a painful and arduous journey out of Syria less than two years ago.

In May 2015, Al Hommada traveled from Deir Ezzor, his devastated hometown about 200 miles east of Aleppo, to the Netherlands, in the hopes of creating a better life for himself and his family.

It meant not only leaving behind a town marked by constant blackouts and water and food shortages, but also abandoning the dream that his three sons—Ali, now 6, Zain, 4, and 18-month-old Abdulrahman—would be able to have a childhood like his.

“It was the hardest decision I ever had to make,” recalls Al Hommada, 36.

But that challenging decision led to the job opportunity of a lifetime with Janssen, a member of the Johnson & Johnson family of companies—and a chance to give his family new hope for the future.

A Trek Across a War-Torn Country

In 2015, Al Hommada, who had studied at the University of Aleppo, was working for the World Health Organization (WHO) in Deir Ezzor, where he was tasked with discovering and tracking communicable diseases and observing polio vaccination campaigns.

While doing fieldwork, he endured constant harassment by people who falsely assumed that his organization had insidious ties with groups abroad, not to mention that war had been waging since 2011.

Those who stayed behind did so because they had no other choice, explains Al Hommada, or, like his parents, were too old to make the journey. “Staying was too dangerous,” he says. “Even my work wasn’t safe anymore.”

I saw millions of people living in camps at the borders in conditions not even suitable for animals. I knew then that returning to Syria would be next to impossible.

Once they'd made the decision to flee, it took Al Hommada and his family several days and many failed attempts—sometimes having to wait more than 24 hours at checkpoints with empty stomachs—to leave Deir Ezzor. But one spring day in 2015, they finally made it to Damascus, Syria’s capital.

But after a month and a half of fruitlessly looking for a job, Al Hommada realized that he had to keep going. "I knew that a new life meant moving to a new country,” he says.

So Al Hommada decided to head for the Netherlands, which he'd heard—through word of mouth and what he'd read online—was welcoming to Syrian refugees. But that meant leaving his family in Damascus until he secured a job.

130 Years of Giving Back: How Johnson & Johnson Has Helped the World in Times of Crisis

It took 24 days for Al Hommada to reach the Netherlands. And what he saw on his way out of Syria was catastrophic. “The scenes on the road were something close to disaster," he recalls. "I saw millions of people living in camps at the borders in conditions not even suitable for animals. I knew then that returning to Syria would be next to impossible.”

Al Hommada arrived in the Netherlands in July 2015. He admits that the early days were difficult, and he sometimes went days without being able to speak to his wife, Esraa, and their sons. “I questioned myself a hundred times about whether I really wanted this, and what the purpose of this alienation was,” he says.

But his persistence and strength kept him motivated. He started learning Dutch, first online, then by enrolling in a course at a university in the city of Leiden. He worked on his resume and submitted documents to the Dutch authorities to be granted residency, which he received within three months.

But residency was just the first step toward building a new life. He also needed to find a job in order to be able to bring his family over from Damascus.

After applying for a few positions, Al Hommada received a phone call from a recruitment agency that would change his life. The organization, which helps find temporary staffing opportunities for refugees, secured him a job interview at Janssen Vaccines in Leiden. 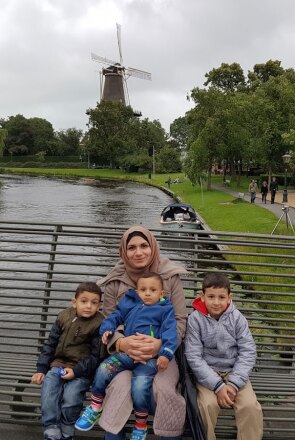 Al Hommada's wife, Esraa, and their children in the Netherlands

“I finally felt like something positive was going to happen,” he says. In January 2016, Al Hommada got the job working on clinical trials as a Good Clinical Laboratory Practice (GCLP) Documentalist in the clinical immunology department. The position required specialized computer skills and experience in laboratory studies, both of which he had from his previous work in Syria.

“I worked more than 10 hours a day," he says of embracing his new role. "I was the first to arrive and the last to leave, and I took every opportunity to learn.”

After seven months, Al Hommada requested to work in the laboratory. His manager not only approved the move, but also gave Al Hommada clearance to train on new machines—and renewed his initial six-month contract for a full year.

The New Groundbreaking HIV Study You Need to Read About

For his part, Al Hommada was struck by just how the company has embraced him and the level of career support he has received. “I never thought that one day I would be working at such an important company, with such amazing people,” he says.

But Al Hommada's gratitude runs even deeper because Janssen also helped him tackle the complicated paperwork involved with helping to bring his family to Leiden in July of 2016. Al Hommada gets emotional when he thinks of all the people he left behind, but the promise that the future holds buoys his spirits. “While I was sad to leave my country," he says, "I’ve found another family in Johnson & Johnson.”

Thinking back on the long road he took to get here, Al Hommada wants his story to inspire others. “I want to give hope for those who have lost it," he says. "As long as there is a tomorrow, there is always hope.”